Listen in as Andy Ockershausen hosts the legendary Sonny Jurgensen on Our Town this week. You’ll feel like you’re part of an intimate, casual conversation as these two long-time friends talk about everything from Sonny’s early days to his present travel plans. 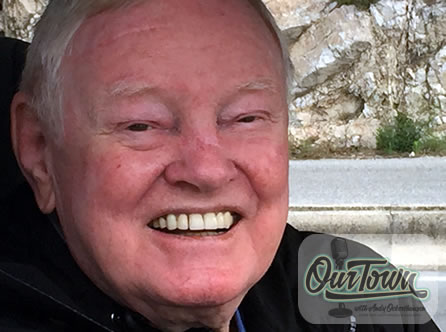 Sonny Jurgensen has been in Washington for over 50 years. He began his career as the Redskins’ quarterback and then continued his Redskins career off the field in both TV and radio announcing for the team. Coach Lombardi once said, “Sonny is a great quarterback. He may be the greatest this league has ever seen. He is certainly the best that I have ever seen. He hangs in there in the worst of adversity.”

Andy reminisces with Sonny about his humble yet remarkable childhood growing up in Wilmington, North Carolina. Sonny’s father hauled freight and Sonny got great pleasure from riding alongside him on trips. Sonny has hilarious stories to share about messing up Coca Cola deliveries while trying to help out his dad. His father was a strong man with a strong personality to match it. He encouraged Sonny to keep playing football in high school. Sonny played all available sports in high school and, believe it or not, at one point Sonny told his dad he wanted to quit football so he could play more basketball. “You quit football, you quit eating here too!” is all his father had to say. And with that, Sonny continued down the path of his football journey. Thank goodness for that or Washington might never have known this amazing man at all!

There were many influential women guiding Sonny in his early childhood as well. You won’t be able to stop yourself from smiling as he shares that it was actually his mother, Lola, who taught him how to throw a football! His sister was a wonderful student and set a great example for him in academics. Sonny also shares memories of his athletic aunt who lived with his family in Wilmington.

Andy chats with Sonny about his college career at Duke University. Then, in part two of this two part series Andy leads him to a conversation about his career in Philly prior to the Redskins.

We hope you have enjoyed this new episode of Our Town with Andy Ockershausen. We invite you to listen to each new episode of Our Town as they roll out over the next several months. You can subscribe to the Our Town podcast on iTunes, Google Play, or if you complete the subscription form in the sidebar to the right you will be notified by email when the next episode appears here on the website.