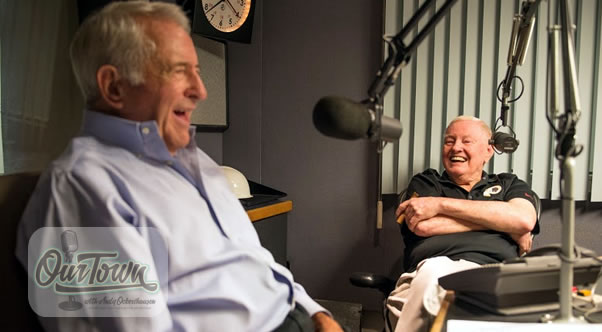 Andy chats with Sonny about his college career at Duke University. Then lead him to a conversation about his career in Philly prior to the Redskins.

When Sonny was traded by the Philadelphia Eagles to the Washington Redskins, he admits that it was a bit of a shock. He actually thought his buddies were playing an April Fool’s joke on him when he first heard the news! “But in the end, it was the best thing that could have happened to me because it gave me a chance to start over again,” Sonny tells Andy.

During Sonny’s Redskins days, he was unstoppable. Sonny is remembered as more than just a great football player. He was a great student of the game. “Sonny is the best quarterback the NFL has ever seen. A more intelligent courageous leader, a more dedicated competitor, a more talented performer would be impossible to find.” In this Our Town interview, Andy Ockershausen discovers Sonny’s deep respect for coach Vince Lombardi. Sonny recalls Lombardi’s great sense of humor and claims that “Lombardi did what no other coach did: Simplify the game of football. Because of that, it made it easy to play.” Andy also speaks with Sonny about his professional and personal relationship with Billy Kilmer.

Sonny is still an icon in the city of Washington even for those who never saw him throw a football. Our town knows his voice, knowledge of the game and sense of humor through his TV and current radio career. During the Our Town podcast, Andy discusses the years that Sonny worked on shows about Redskins football on Channel 9. He pays high regards to George Michael and remembers times broadcasting alongside Glenn Brenner. Sonny also shares some laughs as he speaks of his radio show with Sam Huff and Frank Herzog.

Andy Ockershausen concludes his interview with Sonny Jurgensen as they speak openly about their years of travel together. With their wives, the four of them have explored all parts of the globe together. It is a pure pleasure to listen to these two friends relive some of their most memorable travel experiences.

Sonny has four grown sons of his own now as well as many grandchildren. He still lives in the Washington area during the Redskins’ football season and resides in Naples, Florida for the rest of the year. It’s there that you might find him on the golf course with his old buddy, Billy Kilmer, who still comes to visit from time to time.

We hope you have enjoyed this new episode of Our Town with Andy Ockershausen. We invite you to listen to each new episode of Our Town as they roll out over the next several months. You can subscribe to the Our Town podcast on iTunes, Google Play, or if you complete the subscription form in the sidebar to the right you will be notified by email when the next episode appears here on the website.