Tim Brant, recently retired American sportcaster is Andy Ockershausen’s guest in this episode of Our Town. Tim grew up in Our Town, played football at University of Maryland, had a short lived pro-football career, and a stellar career as a sportcaster on radio and TV. 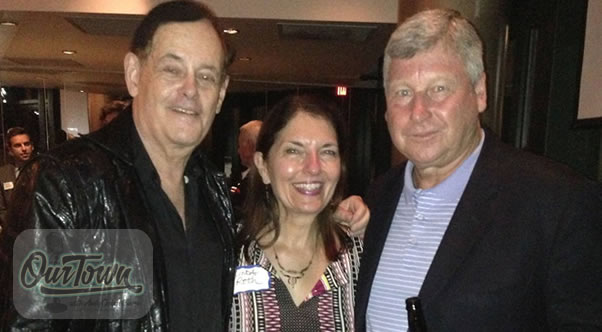 Listen in to hear Tim Brant recall one story after another of life as a sportscaster in Our Town, including what happened as he broadcast Muhammad Ali v Alfredo Evangelista fight at the Capitol Center in Landover, MD, and when he had to tell Paul “Bear” Bryant that he was playing football at Maryland instead of Alabama. You’ll love listening in to this interview because Andy and Tim are dear friends. Their mutual admiration is apparent throughout the interview.

Tim grew up right here in Our Town. In fact, his family has been in the Washington area for generations and have helped to make the Washington DC area what it is today. He and his brothers were all very talented in sports. Tim went to high school and played ball at St. John’s College High School. He went on to graduate from the University of Maryland with a degree in journalism and played football there as a defensive captain and linebacker. Later, he played for the Redskins before a career-ending knee injury.

Andy and Tim Brant met when Tim began work as a sports writer at WMAL radio. He attributes much of his career success to Andy who was a mentor to Tim in the early years of his broadcasting career. These two men recall Tim’s “very first big thing on the air”, the Ali fight. Tim did an amazing job of painting a picture on radio of the fight for the audience during the boxing match between Alfredo Evangelista and Muhammad Ali.

The next career move for Tim was the in TV. Tim remembers being so nervous to tell Andy that he was leaving the station. Andy’s was disappointed but wished him all the best. Andy did predict that if Tim Brant entered TV, he would “end up in Louisville” and, sure enough, Tim eventually found himself in Louisville covering the Kentucky Derby. He couldn’t resist calling Andy to let him know his prediction had come true. They shared a good laugh.

All joking aside though, Tim’s TV career is quite an impressive one. He has served many roles at ABC Sports, including host, sideline reporter, expert analyst and play-by-play. He joined ABC Sports as a college football commentator in 1982. After leaving for CBS in 1987, in 1991 Brant returned to ABC in the booth as an analyst and play-by-play man for College Football on ABC, a role he held until 2007.

In 1987 & 1988, Brant was paired with analyst Hank Stram on NFL broadcasts. He also teamed with Jim Nance in 1990. In Nance’s 2008 best-selling book, Jim says that he never forged a friendship as quickly with anyone as he did with Tim Brant.

Locally, he has hosted sport pre-game specials such as Are You Ready for Washington Redskins games.He served as Vice President, Sports at WJLA-TV in Washington through May, 2015. He previously served as the station’s sports director from 1978 until 1982.

Tim currently lives in Potomac, Maryland with his wife Janet. They are very active in local charities. He has four grown children, Jason, Kevin, Lindsay and Julie. He has many grandchildren and feels so blessed with his family.