Sports marketing and broadcasting can be difficult careers to get started. Our Town host Andy Ockershausen and guest Eric Shuster discuss what to do to start a career in sports marketing and how to be successful. Andy says that Eric may be “possibly the most powerful man in sports in ‘Our Town’”. Listen in and find out how Eric achieved such a standing in Our Town. 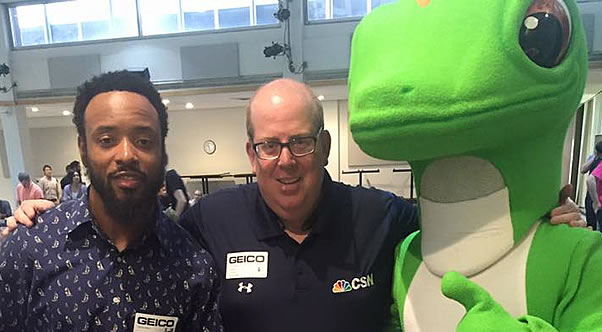 Let’s start at the beginning. Eric didn’t really know it at the time, but one of the most important meetings he would ever have was with basketball great Lefty Driesell. Eric met retired college basketball coach Lefty Driesell at a youth basketball camp when Eric was just in elementary school. Coach Driesell sat with Eric and told him something that has proven true to this day, and
encouraged him to pursue a career in sports other than on the field. Eric took Coach Driesell’s advice to heart in high school when, at 15, he became an Assistant Coach to the girls’ basketball team at his high school John F. Kennedy in Silver Spring, Maryland.

As you continue to listen in, Eric discusses what it takes to get into sports marketing. No need for a Master degree, according to Eric. Rather get your foot in the door as an intern, work hard, and let people know who you are. Get involved, be a go-getter, ask what you can do to help. Learn the business by being on the inside. Shuster stresses to get involved as an intern as well as – and Andy agrees – meet as many people as you can.

Eric shares stories about how working with some of the biggest names in sports such as Rick Dempsey, former Baltimore Orioles catcher and World Series MVP, Shawn Springs, former Washington Redskins cornerback, and Jason Campbell, former Washington Redskins starting quarterback have led to lasting friendships with them, as well as introductions to other pro athletes who he also calls his friends. He attributes this to building trust in those looking to learn the business and looking for advice. Today some of his best friends are some of the biggest names in the NFL, NBA and MLB.

Eric goes on to discuss his former bosses with Andy. You’ll hear what he learned from them, and how they helped shaped the successful professional sports marketer he has become.

“If you give you will receive.” Eric has heard Andy say this again and again, and it is something he will always remember and follow. Andy prompts Eric to talk about a foundation Eric started in honor of his Mom, who was a special education teacher at Brook Grove Elementary School. Eric founded The Elaine Shuster Foundation to give back to his alma mater, Kennedy High School, when he found that the sports facilities were in decline and there was no place for the kids to go. This year marks the third year of fundraising that will benefit Kennedy and a few other schools. Many of the professional athletes Eric has befriended over his career come out to support his effort. This year’s Elaine Shuster Foundation benefit event will be on December 12, 2016 from 6 – 9pm at the American Tap Room in Bethesda with hosts Santana Moss and Ryan Kerrigan.

We hope you enjoy listening to Eric Shuster discuss his perspective about Our Town with host Andy Ockershausen. We invite you to listen to each new episode of Our Town as they roll out over the next several months. You can subscribe to the Our Town podcast on iTunes, Google Play, or if you complete the subscription form in the sidebar to the right you will be notified by email when the next episode appears here on the website.