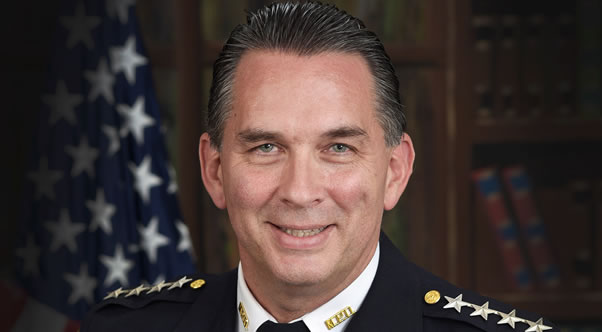 Andy Ockershausen: This is Our Town. We are so delighted and we think it’s an honor to welcome the Chief of the Metropolitan Police Department, Peter Newsham. Chief welcome to Our Town.
Chief Peter Newsham: Thanks for having me. I appreciate it.
Andy Ockershausen: You know you have such a storied career. You haven’t been in Washington that long but you love Our Town obviously. You could have gone many places but you’re from the Massachusetts area.

On Growing Up in Massachusetts – Once a Red Sox and Patriots Fan, always a . . .

Chief Peter Newsham: Well it’s interesting. I was a political science major. Initially I was an accounting major, which was very easy for me but also wasn’t interesting to me. Political science was very interesting to me. Where do all good political science majors go when they graduate? Washington D.C. right?
Andy Ockershausen: Absolutely.
Chief Peter Newsham: Try and get a job on Capitol Hill, and so I came down here and I was looking for jobs on The Hill and the jobs didn’t pay very well and they required very long hours. I couldn’t afford to do that. I saw where they were hiring a bunch of police officers for the Metropolitan Police Department. I said you know what, and I had some family that were in policing. I ended up joining the police department. I always tell people this. It’s the best decision I ever made in my life. Really was.
Andy Ockershausen: Well obviously. You got to the top of the heap. It wasn’t easy.

Law Enforcement and Serving to the Community – Then and Now

Chief Peter Newsham: I think that’s part of it and I also think, you and I have had this conversation is that policing in America is operating under a microscope. There’s been a very bright light shined on policing in our country and I think in a leadership position in policing, I’m 100% okay with that. That scrutiny is really important for policing. I also think there’s some other parts of the criminal justice system that you need to have a similar bright light shined on them. There are some decisions in my opinion that are being made that impact public safety that are not getting the attention that policing, for example, is getting.
We have focused in the district on reducing violent crime. If you knew about some of the repeat violent offenders that we have out here and some of the decisions that have been made regarding them, I think people would be very concerned about some of those decisions that are being made.
Andy Ockershausen: The courts and it’s not just Washington. I think that’s true all over the country. I hear of that anyway.
Chief Peter Newsham: It’s everybody in the system and I’m not going to point fingers at any particular group but I do think that and maybe the decisions are right. There’s positions on both sides. There’s defense attorneys, there’s prosecutors and everyone has a different idea but I think that ultimately the community should be aware when those decisions are being made. One example I’ll give you is that so far this year in 2017, more than 17 people that we have arrested for murder, in our city just this year, were under some type of supervision at the time they committed the murder. I think that me, Pete Newsham personally, I would question the level of that supervision if they were able to go out there and take somebody’s life.
Andy Ockershausen: That’s incredible, 17?
Chief Peter Newsham: Yeah. If you think about it, that’s 17 families that have lost a loved one.
Andy Ockershausen: Absolutely.
Chief Peter Newsham: Those are communities. Whenever somebody is murdered in the District of Columbia, you have the family obviously that’s impacted, but an entire community. To have somebody killed on a city street in your neighborhood is impacted by those things. I welcome the scrutiny on policing in America. I particularly welcome the scrutiny on our police department here in Washington D.C. But I think that people really need to pay close attention to some of these other decisions that are being made.

The Wharf and Harbor Patrol