Paul Berry is an award-winning producer, reporter, and news anchor who has covered news in Washington, D.C. and Detroit for more than 25 years and currently hosts his own nationally syndicated weekly radio talk shows. Andy O and Paul Berry reunite in this all new episode of Our Town podcast to reminisce about the broadcast industry and where it is now in Our Town. 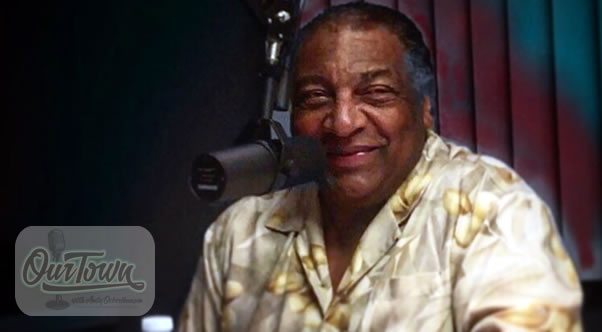 Paul and Andy met each other in 1972 when he came to WMAL. Paul already knew that he loved Washington, DC from a previous trip here and was thrilled with the opportunity to work in this city. Eventually, WMAL split into two different stations. Paul stayed with TV and Andy went with radio but these two have remained buddies over the years. It is a pleasure to hear them chat about both the past and the present during Our Town.

Paul began broadcasting in Vietnam. It was there that he established the first radio station in that part of the world for the military. The show was a hit and folks from the US started sending in records for him to play on the air for the GIs.

Once out of Vietnam, Paul went to the Sheppard Air Force Base in Texas and continued broadcasting for the troops. At that time, there were no blacks on radio in Texas. He made quite a name for himself there. Little by little his hours on the air started to increase as he grew in popularity. It seemed that Paul was a natural on the air.

Paul and Andy discuss how Paul first got into TV. While at home in Detroit in 1968, Paul was taking a short break from the military. He decided to visit a radio station where he randomly met the producer of the station. The producer encouraged Paul to write a resume and submit it to WXYZ in Detroit who happened to be looking to hire minorities at that time. Paul almost headed back to Texas to sign on for active duty again but, as luck would have it, WXYZ wanted to hire him on the spot. They negotiated a deal in minutes and, in April of 1969, he went on the TV with his first story.

In Paul Berry’s time with WMAL-TV TV7, he established himself on the 5, 6 and 11:00 news. Paul wasn’t just interested in reporting the news though, he wanted to be sure that he made a positive difference in the lives of his viewers so he brought two shows to the station: Crime Solvers and Seven On Your Side. Through these shows, the police and the citizens of the community worked together to make it a better, safer place to live.

Paul is married to his lovely wife, Amy. They have three children who were all born right here in Georgetown. Paul has strong connections to the Eastern Shore where his wife’s family owns many of the local businesses in the area. Amy is now a realtor, helping families find homes that meet all of their needs.

Andy connects further with Paul as they discuss everything from The Paul Berry Golf Tournament for charity, to his 25 years as an auctioneer, to the Paul Berry Days celebrated in DC.

The interview comes to an end as Andy inquires about Paul’s current radio show venture. Paul has two weekly Sunday shows: Streetwise, a show about real estate, and Home and Family Finance, a show which addresses financial planning needs.