Our Town host Andy Ockershausen interviews two outstanding professionals, Attorney Mike Collins and Dr. Joe Novello, in this all new Our Town podcast episode. Andy introduces both men to us by telling us about their very different career paths, then segues into a long laundry list of what they have in common. 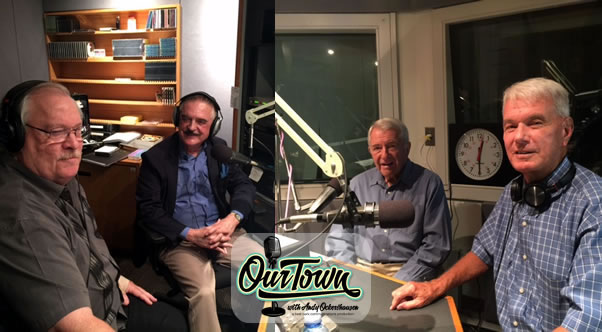 Up first is Attorney Mike Collins. He is managing partner of The Collins Firm and host of Legally Speaking radio show on WMAL. Andy prompts Mike to talk about his alma mater Notre Dame. Mike provides insight into his early years growing up in Chicago’s school system, and how he started Notre Dame at 16. They go on to talk about Mike’s Dad, the first Notre Dame fan Mike ever met. Although never having attended Notre Dame, his Dad had season tickets with 9 friends and he attended every home game for 49 years. The group was cut off from the tickets when the person whose name the tickets were in passed away. Mike went through a letter writing campaign to get his Dad reinstated and was successful. His Dad ended up with four season tickets for his lifetime, which Mike had to acknowledge and promise not to contest down the road.

As founder of The Collins Firm, Mike has been conducting estate planning seminars throughout the DC Metro for years. He used to charge for them, but not any more. Mike has made it his mission to educate people 50+ about estate planning. Mike realizes that most folks don’t want to think about planning their estate although they know it should be done. His free seminars are the perfect way to get people motivated to get their affairs in order starting now.

You’ll be entertained as you listen in to Mike describe his entrepreneurial experiences in Southern California. He and a partner started the first skate park and waterslide park there. Toward the end of his interview, you’ll laugh as you listen to Mike recall stories about his waterslide investment. These successful ventures resolved community issues for young and older people alike and made life more harmonious between the two groups.

Mike wraps up this first part of his interview with Andy by recalling his major and the changes that took place during his four years at Notre Dame, before he attended law school at Georgetown University.

Next you’ll listen in to a personal conversation between Dr. Joseph Novello and Andy. Andy is quick to thank Joe for his help with Andy’s then teenage son, who came to visit one summer. Andy says he never forgot the advice he received from Dr. Novello, and passes it on to this day to parents of teenagers.

They also discuss how Joe became a Navy flight surgeon. At the peak of the Vietnam War, Joe was a resident in surgery after medical school at Michigan. He knew he would be drafted so he signed on to the Navy Flight Surgeon program. When he was done, his orders took him to Puerto Rico. While there he and his squadron made hops to Guantanamo Bay Naval Base (GTMO) many times. Afterward, Joe went back to Michigan to do a residency in psychiatry.

You will also learn during their discussion that he was a child of immigrants and grew up in Cleveland, Ohio. His parents expectations were that one of their sons would be a professional and the other a priest. Joe became and doctor and his brother became a priest – well sort of. Joe’s brother is Don Novello who played Father Guido Sarducci on Saturday Night Live.

Andy and Joe reminisce about Joe’s Saturday evening call-in show on WMAL. Joe mentions that it was somewhat unchartered territory which resulted in as Andy says “Some of the weirdiest calls”. Joe was very pleased with the service he provided his listeners on that show. His greatest moment though was not on his on show, but when he had to stay on to answer a few of Ken Beatrice’s callers. Ken happened to be at training camp and was stuck in traffic so was late to his show. Dr. Novello stepped in to help out and took first two or three calls. The callers knew what had happened, Joe let them ask their questions and everyone had good fun until Beatrice got there and all went back to normal. Andy and Joe reminisce about Ken Beatrice, and his contribution to Our Town through radio and his church.

Of all of his media experiences over the years, Joe tells Andy that his call-in show on WMAL gave him “the most joy and the most professional satisfaction.” Among the most memorable call-ins were children. This was surprising because WMAL’s demographic was adult.

Joe Novello and Mike Collins talk about how it was they came to do their shows on WMAL. Mike recalls listening to Joe after the Redskins show and listened for years. Mike became a huge fan of Dr. Novello. One day out of the blue, Joe called in to talk to Mike about his services, and only wanted to speak to Mike. After Mike pulled himself together, he took the call and the two became fast friends.

As the two continue their conversation with Andy, they discuss Notre Dame and the improvements to the stadium and related facilities. Listen in to learn what a “half bunner” is. They finish up with the growth of Our Town, and the current building explosion. Andy continues to talk to Joe and Mike about how wonderful it is to see all the young people out and about at restaurants and bars every Spring.

Mike ends up the interview talking about his Southern California waterslide investment. How he found it and decided to invest in it after he and his partner took a trip to Myrtle Beach. Mike relates the full story of how the waterslide came to be, from finding the property and negotiating to lease it, to opening day. You are guaranteed a laugh out loud moment when you hear how a donkey got to the top of the waterslide, and down again.
Joe finishes up the interview with Andy discussing his current project. He is writing a biography that he has been working on for the past four years. It is a biography about Father Angelo D’Agostino, a Jesuit priest – a man about Our Town for many years. Father D’Agostino left Our Town to go to Africa to establish the world’s first orphanage for HIV children, and eventually bring treatment to this community.

We hope you have enjoyed this new episode of Our Town with Andy Ockershausen, Attorney Mike Collins and Dr. Joseph Novello. We invite you to listen to each new episode of Our Town as they roll out over the next several months. You can subscribe to the Our Town podcast on iTunes, Google Play, or if you complete the subscription form in the sidebar to the right, you will be notified by email when the next episode appears here on the website.