Marc Bluestein, Founder and CEO of Aquarius Sports and Entertainment, shares his passion for sports and marketing with Our Town host Andy Ockershausen in this all new episode of Our Town podcast. He is originally from Philadelphia, but grew up in Our Town, and as Andy tells him “is a big part of Our Town”. 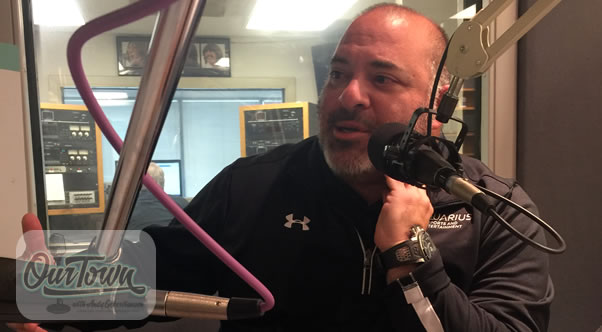 Marc Bluestein, also known as “Blue”, grew up playing baseball and always dreamed of playing college ball. After high school he attended the University of Tampa and successfully “walked on” to the university’s baseball team. He realized after a short time that he couldn’t compete in Division 2 baseball in Tampa, and ended up transferring to the University of South Florida to concentrate on his studies. While at USF, Marc interned with the Tampa Bay Lightning after they joined the NHL in the 1992-93. He came back to Our Town after college, but is quick to say that Tampa holds a special place in his heart.

Blue began his career in Our Town with W.B. Doner Advertising in Baltimore. He eventually moved close to Doner’s offices in Baltimore and lived with three roommates. His starting salary was $18,000 and rent was $195 month. Marc would spend weekends with his then girlfriend in DC.

Marc Bluestein’s Doner accounts included FILA, marketing tennis as well as ski and snowboarding, as well as MidAtlantic Milk Marketing Association and First National Bank of Maryland, which later became All First and then M&T. These accounts not only involved media planning and buying but they all used sports sponsorships and sports media buys as part of their communications platform. For instance, FILA’s first big deal signed was with Sammy Sousa as endorser. Marc had become the sports marketing expert and was made Sports Marketing Manager at 23. He used this opportunity to build his own foundation for his career in sports marketing. After a few years, Blue packed a U-Haul and moved to Manhattan, where he had always dreamed of working.

At 26, Marc Bluestein went to NY to work for DMB&B and then Mediavest. Blue’s client list was impressive and he was able to grow his sports marketing experience further. For example, he worked with Coca-Cola Classic expanding their NFL & NASCAR programs. He also worked with Norelco who worked with MLB, X-Games and Gravity Games. One of the Norelco promotions was the 21 day challenge which involved ESPN radio’s Mike and Mike and Jim Rome.

Blue took advantage of an opportunity to move to Sports Illustrated. He drew upon his sports sponsorship experience to help them grow from selling print ads to offering sponsorship opportunities. SI wanted to take their brand and grow their two franchises with sponsorship opportunities. Marc Bluestein recalls the details of two incredible SI promotions that involved Miller Beer and Pontiac, respectively. You will want to listen in to the interesting stories of behind these promotions.

Marc and his wife decided to move to Washington DC, so Marc finished up in New York at Sports Illustrated and they came back to Our Town where he worked at Home Team Sports, now Comcast Sportsnet. The offer to come back was attractive, in part, because he would be working with all the sports teams he loved. Andy compliments Marc on the work he did at Comcast Sportsnet. He was a star and brought a touch of New York advertising with him, which benefitted his new employer.

Looking to advance, grow and figure it all out, Marc started looking at relocating but ended up accepting advice and guidance from a former client, Rick DiBella and, his boss, Jeff Parsigian. They suggested that he start his own business. So. . .9 years ago during the Thanksgiving holiday he downloaded an online template and completed a 15 page business plan, which was the impetus for his new company, Aquarius Sports Group. Andy and Marc discuss the very personal nature of the name Aquarius, and what prompted Marc to take the risk to start his own business.

“Aquarius harnesses the unique commitment people have to sports and entertainment and combines it with some of the most influential and trusted brands in America.” Aquarius is entering its 10th year in business and is lucky to have great clients: AAA Roadside Assistance was Aquarius’ first account. Other clients include Target Corporation and its vendor partners who work with NASCAR, and M&T Bank, Medstar Health, and Emory Healthcare of Atlanta.

Marc is proud to be on the USA Board of Trustees for United Way. The largest non-profit in the world, United Way has been the official charity of the NFL for 44 years. Blue was asked to re-energize, re-develop and re-structure the way United Way is advertised through the NFL under Commissioner Goodell.

Marc Bluestein is a sports nut and says that the love of sports in now in his families DNA. All four children are in sports and that keeps them busy. Their oldest daughter has competed nationally in acrobatic gymnastics and may be on track to compete international as acrobatic gymnastics. Currently, USA Gymnastics is lobbying to have acrobatic gymnastics become an Olympic sport, and the Bluestein family is excited about that possibility.