Our Town guest Jim Dinegar is President of the Greater Washington Board of Trade. By the end of their conversation, host Andy Ockershausen tells Jim “You are the image, Jim. You’re stuck with it!” Jim is humble in his response, saying that he does get to work for the Board of Trade, but “it is not him, and he’s not it.” 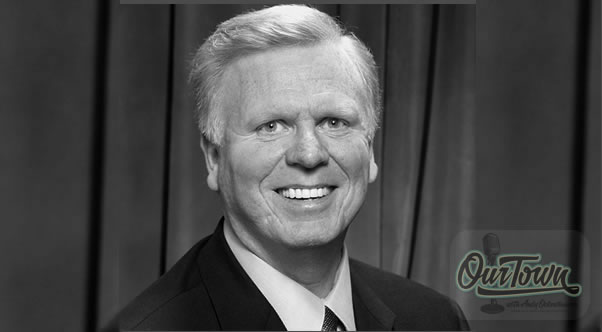 Throughout the interview, time and again, Jim Dinegar demonstrates humility, a rarity in a man of his standing in a city like Washington DC. Accordingly to Andy, Jim’s impact on the region’s business over the last 10 years as President of the Board of Trade is big. After listening in, you might agree that it’s due to Jim’s passion for the community in which he lives and works, and for the work he does representing the Board of Trade and its members within the Washington DC metro region.

Although originally from Bayside, Queens, New York, Jim calls the Washington metro his home. His first impression of Washington DC as a visiting high school student was a lasting one. He came to see how government works, liked the fact that Our Town was singly focused around government at the time, and came back to attend Catholic University where he studied politics and history. Listen in to hear Jim list a few classmates that have gone on to become notable government officials.

Before coming to the Board of Trade, Jim Dinegar worked with national associations and his business was national in scope, with lots of travel mostly around the country. When the call came from the Board of Trade for him to become President it was posited as an opportunity to “stay and live and work here to represent the place where you chose to live and work and raise your family, and for me that was catnip, that was too good to pass up.”

Jim describes his position as President of the Board of Trade as a “facilitator that can help convene people, facilitate the discussion and help get things done.” That said, he is quick to tell us that the “Power of the Board of Trade is really in the membership. . .bank presidents, managing partners of law firms, the dedicated people out of public relations firms, advertising and marketing…” He also says with pride that the Board of Trade staff is incredibly dedicated and hard-working, and committed to good customer service and quality.

Andy and Jim talk about the growth Washington DC metro has experienced. They agree…it’s going to get bigger and bigger but it will be connected with Baltimore and Richmond… into a megalopolis. They also discuss the visionaries who’ve made it, and are making it, what it is today – Milt Peterson, Ted Lerner, Bud Doggett, and Doug Jemal to name a few.

When discussing the changes to Our Town over the last ten years, Jim tells Andy “When you look at this place, people choose to live here. I was asked about people who would leave here after the Inauguration, I don’t see that – It doesn’t happen any more. It’s not like Chicago should be expecting a big influx of people back… even the President and his wife are going to stay here.”

“What I have seen over the years is that the smaller town feel of Washington, Rosslyn and Bethesda are becoming more of a big powerful region . . . we have a re-emerging.”

Andy and Jim discuss transportation issues and what needs to be improved upon. They agree that “We are a world leader and world capital, but too often, we don’t play that way and we don’t think of ourselves that way, we can’t live with a Metro system that’s hobbling along- we have to have the best transportation. We need a quality transportation system to support the people who choose to live here. “ You will find their discussion on transportation enlightening to say the least. Think redefined traffic patterns, water taxi system, and reciprocal taxi policies.

Jim and Andy also discuss what is working, and agree that the city government looks bright. They also mention the tremendous positive impact The Wharf will have on Our Town, specifically for The Arena Stage and surrounding area.

One thing is certain . . . Andy Ockershausen and Jim Dinegar have one thing in common – passion for Our Town. We hope you listen in and enjoy the energy they generate in discussion about their beloved Our Town. We also invite you to listen to each new episode of Our Town as they roll out over the next several months. You can subscribe to the Our Town podcast on iTunes, Google Play, or if you complete the subscription form in the sidebar to the right you will be notified by email when the next episode appears here on the website.