Irene Pollin, a major contributor to the growth of Washington DC metro, is Andy O’s special guest on this all new episode of Our Town podcast. 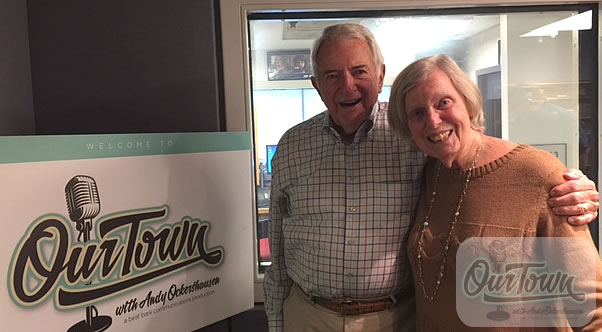 Irene Pollin has recently released her memoirs, “Irene & Abe: An Unexpected Life”. Her book reveals the ins and outs of Irene’s life with her husband and business partner Abe Pollin. Irene now shares her memories with host Andy Ockershausen in this episode of Our Town.

Irene Pollin and Abe Pollin were introduced by Irene’s Aunt Fanny who happened to be married to Uncle Dan of the Pollin family. Irene was 17 and living in St. Louis with her family. Abe,18, was living on the East Coast. After they met, Abe wooed Irene long distance – writing one letter after another. Irene recalls visiting his family in Washington DC in 1941 at their beautiful home off of 16th Street, NW. Irene and Abe dated more than a few years. Eventually, Abe not only successfully convinced Irene to move to Washington DC to be with him, but he also convinced her entire family to move with her. The two finally married in 1945 after the war.

Most know that Abe and Irene Pollin literally built Washington DC. Abe’s Dad was in the construction business through the 30s into the mid 40s. He owned an extremely profitable plumbing and heating business (during the Depression) and that made construction a natural path for Abe and Irene to follow. They built houses and apartments and then years later they found themselves building massive complexes such as the Capital Centre and the Verizon Center. The Pollins had a tremendous influence on Our Town and found it an exciting time of growth for Washington, DC.

Before Irene and Abe built the Capital Centre they were owners of the Baltimore Bullets. Irene tells Andy they never had any intention of owning a sports team but buying the Baltimore Bullets was a way to level out their lives. Prior to, they had suffered the loss of their daughter, and then Irene’s parents, so buying and owning the team turned out to be a good diversion. Listen in as, Irene vividly describes the intense feeling the first time they entered the Civic Center knowing that they were the owners.

Baltimore was not a basketball town, and their efforts to grow their team didn’t work. After 9 or 10 years, when the Pollins decided to leave, Baltimore did nothing to make them stay. Abe and Irene were builders so they decided to build an arena for their team, and that’s when the Captial Centre came into being in Landover, Maryland. The Baltimore Bullets became the Washington Bullets.

Building the Capital Center changed Our Town in major ways. Many big events that couldn’t come to Our Town before, could happen now. One of the most memorable events for Irene was one of Ronald Reagan’s inauguration celebrations. Frank Sinatra was on the bill for that evening, and Irene shares a story of what it took to meet him. Let’s just say she was less than amused.

Andy and Irene discuss the travels Irene writes about throughout her book. The Pollins traveled both with their sports teams, and for fun during off season. Together Abe and Irene enjoyed extraordinary trips to Africa, China and the Philippines. On their trip to the Philippines they were guests of Ferdinand and Imelda Marcos. Irene laughs as she tells Andy about a wardrobe malfunction and how Wes Unseld held her dress together in the back as she got off the plane in Manila to a crowd of people.

Andy reminds us that both the Capital Centre and the VerizonCenter were built with the Pollins’ own money, they weren’t looking for handouts and incentives from the government. The VerizonCenter, previously known as the MCI Center, has enjoyed success Irene and Abe couldn’t have imagine. Irene thinks that access to the center via subway had a lot to do with it, and is proud that it had such an impact on Our Town. Irene also credits the center’s existence to then Mayor Marion Barry’s unwavering commitment to them. She goes as far as to say that building the center wouldn’t have happened without it.

Years after buying the Baltimore Bullets basketball team with Abe, Irene decided to go back to school to earn a Master’s degree in social work. She received her MBA from Catholic University. Afterward, she opened her own practice so she could affect a positive impact on the lives of other families who may have to suffered in the manner she did in the loss of her children.

Andy affectionately comments on her deep passion for the city. She and Abe truly cared about Washington DC and it shows in all that they have poured into it. He calls them true citizens of Our Town. Irene doesn’t skip a beat by letting Andy know the feelings mutual.

We hope you have enjoyed this week’s episode of Our Town with Andy Ockershausen and his special guest Irene Pollin. We invite you to listen to each new episode of Our Town as they roll out over the next several months. You can subscribe to the Our Town podcast on iTunes, Google Play, or if you complete the subscription form in the sidebar to the right, you will be notified by email when the next episode appears here on the website.