Harry Jaffe is a brilliant award winning writer and author, and a media strategist. As Andy O puts it Harry covers the good, the bad and the ugly of Our Town. Andy calls him a local celebrity, a friend and welcomes him as a special guest in this all new episode of Our Town. Andy wants you to get to know Harry Jaffe. The Harry no one knows. 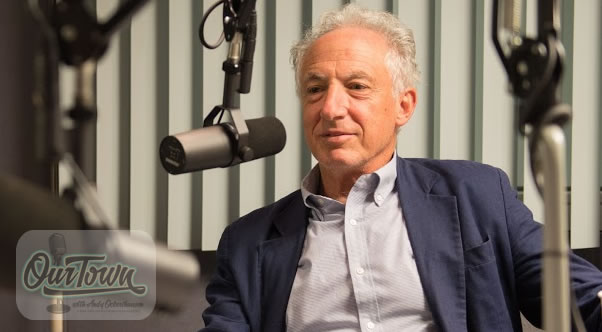 Harry is a Philly boy and can’t escape it. He says “I wish that I could root for the Washington Nationals but I don’t like them because I’m a Phillies fan. . .” He says this even after leaving home at 17. He recalls that Wilt Chamberlain and his older sister attended high school together, and he himself attended the high school where Kobe Bryant would eventually go. Although he applied to several colleges, and was even recruited by Dartmouth to play Lacrosse, his Dad had the final say on where he would attend – Dickinson College in Carlisle, PA where the Washington Redskins had training camp for many years.

Harry and Andy talk Lacrosse and how popular it is in the Northeast. Back in the day, Harry tells Andy, he “played Lacrosse with wooden sticks that really hurt when you hit somebody and that was why I love lacrosse is because it’s the only sport where you can legally hit somebody with a stick.”

Harry goes on to talk about Dickinson College. It is a liberal arts school that doesn’t prepare one for any profession much less journalism. Harry came out of college as a decent photographer and that’s what got him into journalism.

Andy asks Harry about how he came to Our Town. The first time, Harry says “was in 1971 when I was arrested for the May Day protests. I was arrested on Dupont Circle. I was a senior in college. They took me to the DC jail and I wound up suing the Federal Government because it was an illegal arrest. About ten years later I got paid 1500 bucks in a settlement because we sued in a class action suit.”

Next stop for Harry after college was Vermont. He tells Andy he was a hippie but even so he had to make a living and went to work for the Rutland (VT) Herald as a weekend photographer in 1974. He said “it was like the hand of God came down and said ‘Harry your home.’ I adored being in that newsroom and I learned how to type I learned how to be a reporter.”

Harry Jaffe covered Patrick Leahy the first-term senator from Vermont – a Watergate baby elected in 1974. In 1978, having been at the Rutland Herald long enough, Harry applied for a press secretary job with Leahy and he was hired. That’s how Harry started working in Washington DC. Not much for being Leahy’s mouthpiece, Harry left his press secretary gig in less than a year and went back to journalism. He wanted what he wrote under his byline, plus Leahy “kept disappointing me. I love Patrick. He’s a good Senator but he did things that I felt were not up to snuff and so I left.”

Jaffe went to work for a non-defunct small news service, States Service, that covered Washington DC for small towns and small papers all over the country. After working for States Service, Harry freelanced pieces for the Washington. He also wrote Post Watch for the Washingtonian Magazine. Andy and Harry discuss the popularity of the column during the 90s and early 2000s. It was the most read column in the magazine. At the time, a lot of people didn’t like the Post, so when Harry wrote about the Grahams, Ben Bradlee or Sallie Quinn people ate it up.

Jaffe tried not to be a media critic. Rather he just told stories about the people behind the bylines. He made characters out of the writers such as Sally Jenkins, Tom Boswell, and Tony Kornheiser. Jaffe goes on to say that Kornheiser hated him, but that was ok because Jaffe says he wore that as a badge of honor. Andy and Jaffe talk about how Jaffe’s work on Post Watch was necessary to keep the Post and its writers straight and call them on issues on which they might turn a blind, or take too far. Andy recalls the Post’s feud with WOL in Northeast, and how WOL’s Cathy Hughes took it on as a project which was great for the Post because it got them out of their upper Northwest attitude. Andy and Jaffe lament the lack of strong media outlets today in Our Town.

Andy turns the conversation to books that Harry has written. The two start a conversation about Mayor Marion Barry. Harry Jaffe followed the illustrious career of the Barry family and comments that there has never been a more polarizing figure in the city than Marion Barry. He was a smart politician who liked people. Mayor Barry got out in the community. He would often visit WMAL’s softball games accompanied by his son, Chris. In “Dream City: Race, Power and the Decline of Washington, DC”, Harry Jaffe and his co-author Tom Sherwood try to explain how Marion Barry came to power and stayed in power. Andy and Jaffe talk about Mayor Barry’s ability to stay in power despite a polarized city at the time. It is a fascinating discussion about the late Mayor that you may not hear elsewhere. Take a listen.

Jaffe continues to discuss a recent article he wrote for the Washingtonian Magazine about Christopher Barry. He describes Chris Barry’s story as a sad story due to his drug addiction. He was a young man who everyone thought would follow in his father’s footsteps, but who know one in his community helped out of his addiction.

Harry Jaffe is now writing a column for NBC4 once a week. He recently wrote a column discussing the retiring police chief Cathy Lanier and one of the last things she did as a parting shot. She announced that she was going to retire and says – by the way – our criminal justice system in Washington DC is broken beyond repair. Andy and Harry talk about how things need to change. Jaffe writes in his NBC4 column regarding the police chief and the criminal justice system in Our Town that “violent criminals stalk the streets and disrupt our communities because the criminal justice system will not identify them and lock them up for a long time.” He thinks “that if you’re arrested and jailed for a drug offense you should be treated, if you’re running around with a gun shooting people then bye-bye put them away.” Both Andy and Jaffe agree that this problem has been going on for 30 years and it is about time it is resolved. Harry Jaffe’s column can be read on NBC4’s website.

Andy asks Harry about his book “Why Bernie Sanders Matters”. Jaffe discusses following, and writing about, Bernie Sanders. From his days at the Rutland (VT) Herald, Jaffe remembers seeing Bernie Sanders in political debates on TV. “In 1974, 75 and 76 occasionally I’d look up on the TV and they would be at a political debate there be an upstanding guy Republican running for governor and upstanding Democrat running for governor and then there’d be this guy with curly hair big thick glasses sweating bullets talking about socialism and imperialism to Vermont. Everybody thought it was a joke. He became Mayor of Burlington and then right to Congress and then right to the Senate. He’s a brand. There are two brands in Vermont Ben & Jerry’s and Bernie Sanders.” Listen in to hear more about Bernie Sanders through the eyes of Harry Jaffe. Learn more by reading Harry Jaffe’s book on Bernie Sanders, “Why Bernie Sanders Matters”.