Andy Ockershausen welcomes Frank Herzog as his special guest this week on Our Town. Our Town is a podcast that dives deep and reveals new insights into the lives of important Washingtonians who have made this city what it is today. Please listen in this week to learn more about the fascinating life of Frank Herzog as they discuss his broadcasting career in Our Town! 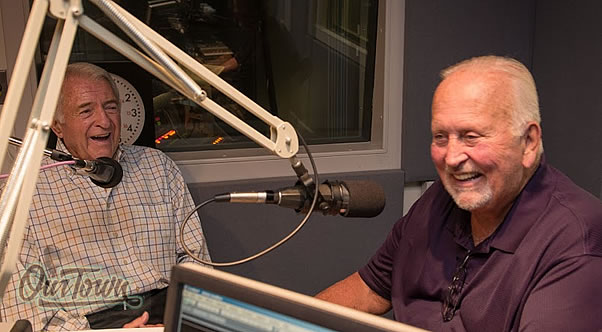 Frank currently resides in North Carolina where he says “the weather is warm and the traffic is thin.” He was back in town recently when he was inducted into Washington DC Sports Hall of Fame. His extended family all came to cheer him on and to celebrate this huge honor. A standing ovation was in order for the man who has left such a mark in the world of sports broadcasting.

Frank Herzog talks about his early days as he transitioned from the United States Air Force into his broadcasting career. He got his foot in the door through persistence and climbed his way to the top through hard work and dedication. He describes his own life as “almost out of a storybook”. When Frank was asked to broadcast play by play professional basketball, he admitted that he knew very little about the rules of the league. That’s when boss Peter Lund arranged an invitation for him to go to the NBA training camp where he quickly learned the NBA rules. After broadcasting for a while, Frank credits veteran broadcaster Jim Lyman with giving him stellar advice that helped him to be a better play by play man : “Give ‘em half a step, don’t try to stay on top of the play.” That good advice stuck with Frank Herzog throughout his career.

Frank became the voice of the Bullets, DC’s basketball team. He admits that play-by-play announcing is his favorite type of broadcasting because he “gets to paint the picture” for his audience. In fact, during this interview with Andy Ockershausen, he tells a powerful story of when he announced a game with a blind man in the booth with him. It was in this moment that it dawned on him that he is the eyes for this man and also for all of his radio listeners.

Frank also recounts a touching exchange between he and Abe Pollin many years after the Bullets won the NBA Championship. At the time of the Championship he declined the opportunity to receive a ring that was offered to him but later regretted his decision. Years later, he asked Abe Pollin’s permission to order the ring. Abe was beyond accommodating and immediately went about ordering Frank’s ring. The exchange between these two men, even after years had gone by, was remarkable. To this day, the championship ring is still one of Frank Herzog’s most prized possessions.

Frank moved on to the broadcast booth for the Redskins and is often referred to as “the Voice of the Redskins”. He formed the famous radio trio with Sam Huff and Sonny Jurgensen. Andy asks Frank about his relationship with Sonny and Sam on and off the air. Frank shares that he learned great stories and the psychology of football from these two former Hall of Famers. During this era, Redskins fans began the tradition of turning down the sound on the TV and tuning in to the radio to listen the show as they watch the game.

During this podcast interview with Andy, Frank Herzog shares his insights and opinions on past and current Redskins including RG3 and coach Joe Gibbs.

We hope you have enjoyed this week’s episode of Our Town with Andy Ockershausen. We invite you to listen to each new episode of Our Town as they roll out over the next several months. You can subscribe to the Our Town podcast on iTunes, Google Play, or if you complete the subscription form in the sidebar to the right you will be notified by email when the next episode appears here on the website.