Catherine Meloy, CEO of Goodwill of Greater Washington and The Goodwill Excel Center, is host Andy Ockershausen’s guest in this all new episode of Our Town, and who Andy calls “a wonderful wonderful friend.” Andy recalls welcoming Catherine to Our Town in 1983-84 and prompts her to start at the beginning . . . her life before Washington, DC. 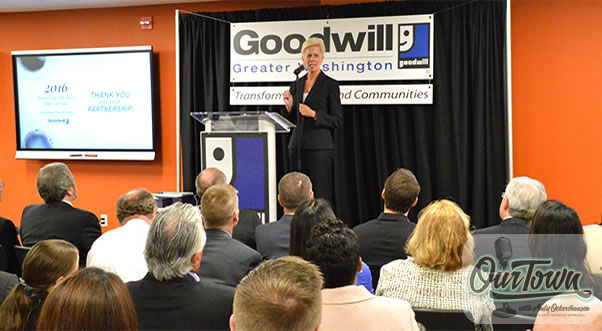 Catherine was born in Camp Lejeune North Carolina. Her Dad was a Marine for 25 years, and now lives in St. Louis where he and her Mom decided to retire to be close to their parents, Catherine’s grandparents. Andy and Catherine discuss her emotional attachment to the military, and how she loves living now in Annapolis, a military town.

Catherine attended high school and college in St. Louis. She tells Andy, that “we had to pay for our own college at that time . . .and at the end of my Sophomore year I owed $10,000 in college debt .” I dropped out “because I just hated owing people money.” Afterward, Catherine went to work for the St. Louis Cardinals as an usherette, then went on to work in the club’s executive offices for announcer Mike Shannon and the coach, Joe Torre. Catherine and Andy spend a minute or two recalling other great announcers such as Harry Caray, Jack Buck, and Bob Costas.

After the Cardinals, in 1976-77, Catherine went to work for the Sheraton Jefferson in St. Louis, at a time when there weren’t many women in executive positions. As luck would have it, they had a few women that were earmarked for their executive training program and she was one. Catherine moved to Kansas City. While there she attended an annual Sheraton meeting and saw the man who would eventually become her husband although neither of them knew it at the time because they didn’t even know each other. Catherine recalls “I did not know him. He walked from the back of the room to the front of the room just to be on this panel and I thought to myself if I ever meet that man I’m going to marry him. Little did he know.” A year later at the annual meeting in January in New York, Catherine and David Meloy met, fell in love, and the rest is history as they say. We encourage you to listen in to how this came about. It is a relationship truly made in heaven.

Catherine moved to Boston to be with David and decided then to leave the hotel industry altogether. Catherine tells Andy, that after leaving Sheraton, she “went door-to-door looking for a job and went to WEEI . . .and did the craziest thing . . . I just went into the radio station . . . and said I wanted to speak to the general manager . . .the general manager came out . . . I think he was so surprised that somebody would just knock on the door and say ‘here I am how about if I come work at this radio station’ . . . and he said anybody’s got this much gumption you’re on I could start on Monday.”

Catherine and Andy discuss her stellar radio sales career starting at WEEI in Boston with the yellow pages on commission. Despite her fear of failure, she stayed with it and it turned out great. Catherine and David moved to New York and she was able to transfer to CBS stations there. Then on to Denver where in short order she was promoted to General Sales Manager. Catherine and Andy met after she and David moved to Washington. She worked at WBAL in Baltimore initially and then was recruited as National Sales Manager by Tony Reneau at WMAL. At the time (1983-84), Catherine was delighted to be working in the community in which she lived.

Catherine and Andy reminisce about meeting each other for the first time and how it just felt right to Andy to hire her. Listen in and you will clearly understand a shared mutual love for WMAL and the good old days when relationships with the advertisers and the audiences were so important and really what mattered.
Catherine left WMAL in 1986-87 and moved to Alexandria to work for WCXR classic rock and then WGMS classical music which later became Sports Talk 980. Catherine relates her greatest business experience . . . working for the Rales brothers “they were smart and they were involved . . .I always say they’re students of business, they’re true students of business and they taught me that you don’t know everything and so you gotta go out and you gotta find out from the best on how to be better at your own job.”

Catherine Meloy and Andy go on to talk about the benefits of being involved with the Greater Washington Board of Trade. Both agree that it works when you show up and act interested and get involved. Catherine equates Our Town with the Board of Trade. Andy goes on to say that when she left radio to go “with Goodwill . . .now that to me was a great thing for Goodwill but it was a shock to broadcast to lose you.” Catherine discusses how she was recruited for the Goodwill position and what her thought process was in deciding to take it. She says it is the best thing she’s ever done. Andy goes on to comment that going to Goodwill put her in a wonderful spot 13 years ago and that she has put Goodwill on a map that was never there before. Catherine says it takes a team and she attributes the success she has had with Goodwill, in part, to the people she brought over with her from broadcasting. She also credits Goodwill’s success to much of what she learned from Andy while working at WMAL. Get involved in the community, she said “we wanted to become a part of the community and we wanted to help the community and we wanted to make an impact in the community and and so we did.”

Catherine and her team at Goodwill are stewards of the brand. The take it seriously and feel a deep sense of responsibility “that not only was it never tarnished but that it really rose to be an exemplary and model nonprofit”. Catherine goes on to say that “people still don’t understand that . . . Goodwill is the best social enterprise ever known to mankind.” Listen in to hear why she thinks so and how Goodwill has strengthened the community through the many projects they have started and continue throughout Our Town. For instance at its core is its retail stores. Donated items are sold and the profit from that sale “goes to our mission which is training and employing people with disabilities and disadvantages.”

We hope you have enjoyed this new episode of Our Town with Andy Ockershausen and his guest Catherine Meloy. We invite you to listen to each new episode of Our Town as they roll out over the next several months. You can subscribe to the Our Town podcast on iTunes, Google Play, or if you complete the subscription form in the sidebar to the right, you will be notified by email when the next episode appears here on the website.