Thom Loverro is a sports columnist, an author and most recently a podcaster. Thom uses his talents and experiences from years on radio to run his own podcast called Cigars & Curveballs. He’s hosted Cal Ripken, George Foreman, Joe Jacoby, Dusty Baker and most recently Max Scherzer. You can subscribe to Cigars & Curveball on ITunes or Google Play, or listen to the latest episode online at Washington Times. 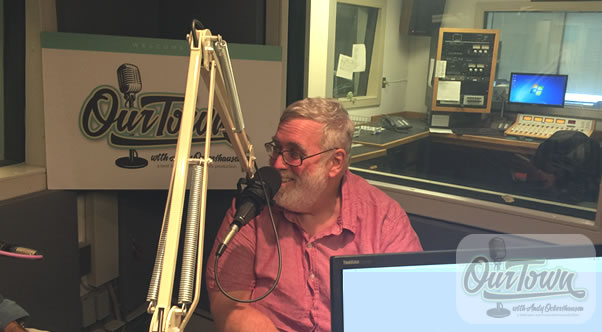 Andy and Thom discuss Thom’s early years growing up in Brooklyn four blocks from Ebbets Field. One of Thom’s earliest memories was leaving the stadium after a Dodgers game. He tells Andy “I grew up in a Brooklyn Dodgers house and then when they left a New York Mets house.”

Andy and Thom discuss Thom’s early years growing up in Brooklyn four blocks from Ebbets Field. One of Thom’s earliest memories was leaving the stadium after a Dodgers game. He tells Andy “I grew up in a Brooklyn Dodgers house and then when they left a New York Mets house.”

The ballpark and team were an integral part of the neighborhood. Thom Loverro tells Andy “Gil Hodges’ brother-in-law used to be my barber when I was a kid. He had a neighborhood barber shop because the players then lived in the neighborhood everybody else lived. They didn’t make a ton of money like they do now. Then they would stay close to the neighbors.” Thom was eight when he watched the legendary field torn down.

Sometime around 1965, Thom Loverro’s dad moved the family from Brooklyn to the Poconos, East Stroudsburg, Pennsylvania. He remembers it as very culturally different than Brooklyn. In fact, he recalls his first year in school there – 7th grade – “they sent me to speech therapy class because they thought there was something wrong with the way I talked and then they realize it was just my Brooklyn accent”. At the end of the day, Thom really loved growing up in the small town.

Thom started college at Miami, but he had to leave school under a cloud when he burnt down half of his fraternity house with a cigar on accident. He eventually wound up at a Jesuit School, the University of Scranton, a big difference over Miami. The University town was very isolated but it was what he needed to really straighten himself out and get focused on what he needed to do.

Thom decided he wanted to be a sports writer since he was 10. He is from a newspaper family and would read the sports sections of the New York Daily News and the New York Daily Mirror every night. He would read Dick Young and Jimmy Cannon and others like them. He started taking his dream seriously when he got to University of Scranton.

After college, Thom worked for a couple of newspapers in Pennsylvania and then eventually wound up at the Baltimore Sun. In 1984 he started there as a news editor and reporter. He oversaw a bureau out in Howard County, and then started reporting by covering the state for the paper in Annapolis. It wasn’t until 1992, when he started working for the Washington Times that he realized his dream to be a sports writer.

Andy asks Thom if it is unusual going from news to sports writing, and Thom said to some extent. He tells Andy “you don’t see it happen much anymore but it was great for me . . . it’s a lot easier right in sports than it is news – the rules are different – the news is much more accountable.” He goes on to say that his news training came in handy to cover “not just sports but all the issues that deal with sports such as the baseball strike in 1994 and the steroid stuff in baseball.”

At the Washington Times, Thom covered the Washington Redskins for one year in 1992 – Joe Gibbs’ last year, and then went on to cover the Baltimore Oriolesuntil 1995. Andy refers to Thom as a baseball expert and remembers listening to him on radio and people always wanting to talk to him about baseball.

Thom Loverro and Andy talk about how Washington eventually got its own baseball team. They almost had the Orioles, but Baltimore saved them at the last minute with a stadium-deal signed by the General Assembly to fund a new ballpark. Thom remembers “Larry Aquino who worked for Ed Williams tells me basically they were signing the details of the stadium deal on a cocktail napkin on a train from Washington going up to Baltimore the night that they were going to announce it at memorial stadium so it was right down to the wire and that gave us a great ballpark in Camden yards and, as a result, that gave us a baseball team in Washington.” Otherwise Edward Bennett Williams was looking at building a stadium in Howard County and Our Town would never had gotten its own team.

Both Andy and Thom talk about loving both teams, the Orioles and the Washington Nationals. Thom has written a couple books about the Orioles during a 10-year period where he locked himself in a basement every night writing books.

Thom is a sports columnist and likes to be able to voice his opinion. He feels fortunate to be in a town that has had some great sports columnists. He worked with Mo Siegel at the end of Mo’s career He was at Vegas with Mo covering fights. Thom figures that the total time he spent in to Las Vegas to cover boxing adds up to a total of over eight months over 20-25 years. He recalls covering Mike Tyson, Riddick Bowe, and Evander Holyfield fights. Thom was recently named to the D.C. Boxing Hall of Fame.

Thom covered a few Super Bowls, but not many. He also covered two winter Olympics and one Summer Olympics, which was in Sydney in 2000. Thom remembers it as the greatest summer games, and thinks “they should hold the Olympics in Sydney all the time.” He was there for a month and says it was one of the best times he ever had. Both Andy and Thom think it’s a bad bet to host the Olympics anymore. They said they think the TV networks should now pick up the tab, and maybe hold the games permanently in the same place each time, maybe create an “Olympics Island”.

Thom and Andy discuss Thom’s broadcast career. Thom loved growing up with newspapers and radio. He used to go “to sleep on Tuesday nights as a kid with a transistor radio under my pillow listening to Cousin Brucie (Bruce Morrow)count down the top 24 on WABC radio 77. Thom tells Andy he is blessed to be working on radio and with a newspaper.

Thom and Andy wrap up discussing podcasting, all new TV viewing habits and how they both love reading the newspaper in hand, instead of electronically. Here’s something to think about – when viewed electronically, Thom tells Andy “when you don’t read the newspaper you wind up reading only what you like . . . you don’t catch the little ten inch story in the corner of B3 that you might not have normally read . . .and those are where the stories are sometimes.”

We hope you have enjoyed this new episode of Our Town with Andy Ockershausen and his guest Thom Loverro. We invite you to listen to each new episode of Our Town as they roll out over the next several months. You can subscribe to the Our Town podcast on iTunes, Google Play, or if you complete the subscription form in the sidebar to the right, you will be notified by email when the next episode appears here on the website.